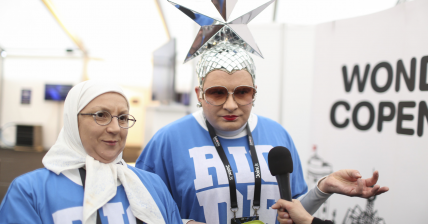 The United Socialist States of Heltacto is a huge, genial nation, remarkable for its state-planned economy, daily referendums, and restrictive gun laws. The compassionate population of 874 million Heltactoans are fiercely patriotic and enjoy great social equality; they tend to view other, more capitalist countries as somewhat immoral and corrupt.

The enormous, socially-minded government juggles the competing demands of Education, Administration, and Healthcare. It meets to discuss matters of state in the capital city of Party City. The average income tax rate is 75.8%, and even higher for the wealthy.

The Heltactoan economy, worth 51.5 trillion Phis a year, is driven entirely by a combination of government and state-owned industry, with private enterprise illegal. The industrial sector, which is quite specialized, is mostly made up of the Trout Farming industry, with significant contributions from Book Publishing and Pizza Delivery. Average income is 58,936 Phis, and distributed extremely evenly, with practically no difference between the richest and poorest citizens.

Social networking sites have discussion groups devoted to planning terrorist attacks, there have been reports of people marrying housepets, Maxtopian villagers starve by the time Heltactoan officials even file the appropriate paperwork needed to help them, and national park visitors are reporting a rash of poison ivy sightings. Crime, especially youth-related, is totally unknown, thanks to a capable police force and progressive social policies in education and welfare. Heltacto's national animal is the Sigma Male, which frolics freely in the nation's many lush forests.