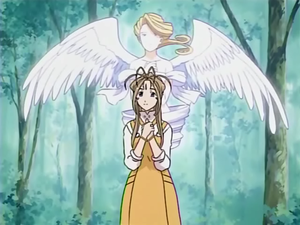 The Celestial Realm 🌸 of Goddess Relief Office is a gargantuan, environmentally stunning nation, ruled by Belldandy-sama with an even hand, and remarkable for its public floggings, daily referendums, and flagrant waste-dumping. The hard-nosed, hard-working, devout population of 31.468 billion Belldandy worshippers have some civil rights, but not too many, enjoy the freedom to spend their money however they like, to a point, and take part in free and open elections, although not too often.

The relatively small government juggles the competing demands of Industry, Education, and Healthcare. It meets to discuss matters of state in the capital city of Nekomi City. Citizens pay a flat income tax of 23.3%.

The frighteningly efficient a Belldandy worshipper economy, worth a remarkable 4,761 trillion hugs a year, is broadly diversified and led by the Information Technology industry, with major contributions from Tourism, Book Publishing, and Soda Sales. State-owned companies are common. Average income is an impressive 151,323 hugs, with the richest citizens earning 5.4 times as much as the poorest.

Literally voiceless people are unable to protest when food and water are denied to them, a rolling news ticker tape of disclaimers runs across the bottom of the screen on all TV shows, rich people sell their mansions to pay for endless rows of mobile homes, and sofas are perpetually on sales that Must End Soon. Crime is totally unknown. Goddess Relief Office's national animal is the chibi Thembria, which frolics freely in the nation's many lush forests, and its national religion is Love.

Goddess Relief Office is ranked 89,545th in the world and 116th in Yggdrasil for Most Advanced Law Enforcement, scoring 1,762.38 on the Orwell Orderliness Index.