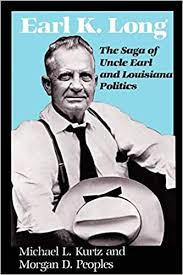 The Earthly Realm of Earl K Long is a gargantuan, orderly nation, ruled by Earl K Long with an iron fist, and renowned for its state-planned economy, punitive income tax rates, and devotion to social welfare. The hard-working, cynical, devout population of 21.68 billion Louisianians are ruled by a mostly-benevolent dictator, who grants the populace the freedom to live their own lives but watches carefully for anyone to slip up.

The large government juggles the competing demands of Welfare, Education, and Healthcare. It meets to discuss matters of state in the capital city of Baton Rouge. The average income tax rate is 52.2%.

The strong Earl K Longian economy, worth a remarkable 1,042 trillion dollars a year, is driven entirely by a combination of government and state-owned industry, with private enterprise illegal. The industrial sector is led by the Gambling industry, with major contributions from Door-to-door Insurance Sales, Cheese Exports, and Woodchip Exports. Average income is 48,069 dollars, and evenly distributed, with the richest citizens earning only 4.4 times as much as the poorest.

Travelers often bring empty plastic bottles on Air Earl K Long flights to avoid the pay lavatories, dictionary sales have hit an all-time high, the best doughnut stores have been taken over by foreign police officers, and Bokononism has been named as Earl K Long's national religion. Crime is almost non-existent, thanks to a capable police force and progressive social policies in education and welfare. Earl K Long's national animal is the nutria, which teeters on the brink of extinction due to widespread deforestation, and its national religion is Bokononism.