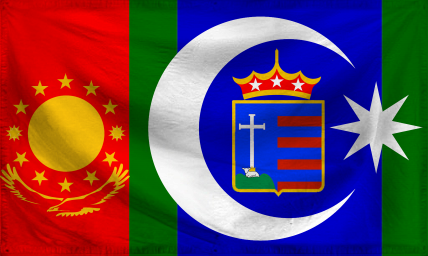 The United SDEPs' Holy Empire of Cretoia-Slrathria is a massive, genial nation, ruled by Sultan-Emperor Schon with an even hand, and remarkable for its fear of technology, keen interest in outer space, and punitive income tax rates. The compassionate, democratic, devout population of 3.516 billion ConZeishen-Qa are fiercely patriotic and enjoy great social equality; they tend to view other, more capitalist countries as somewhat immoral and corrupt.

The enormous, socially-minded government juggles the competing demands of Administration, Education, and Environment. It meets to discuss matters of state in the capital city of Sasanqua-Io. The average income tax rate is 91.7%, and even higher for the wealthy.

The powerhouse Kashin-Zed economy, worth 366 trillion Ƶhaymaſens a year, is quite specialized and led by the Book Publishing industry, with significant contributions from Beef-Based Agriculture and Basket Weaving. State-owned companies are reasonably common. Average income is an impressive 104,250 Ƶhaymaſens, and evenly distributed, with the richest citizens earning only 2.4 times as much as the poorest.

The government seizes all major gold finds, bilingual ConZeishen-Qa are viewed with suspicion, all writing must pass a censorship board before being allowed on the shelves, and artists from across the nation compete to renovate the restrooms of old government buildings. Crime, especially youth-related, is totally unknown, thanks to a well-funded police force and progressive social policies in education and welfare. Cretoia-Slrathria's national animal is the Axolotl, which frolics freely in the nation's sparkling oceans, and its national religion is Catholicism.

Cretoia-Slrathria is ranked 259,963rd in the world and 5th in Saint Margaret Mary for Largest Gambling Industry, scoring -13.61 on the Kelly Criterion Productivity Index.

Most Recent Government Activity: 22 hours ago