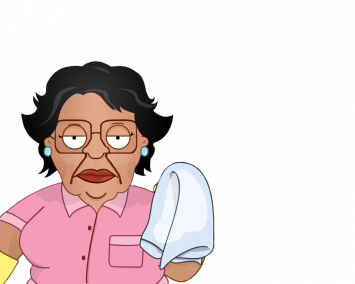 The Cʟєᴀɴıɴԍ Sєʀvıcєs of Consuela de la Morrela is a massive, genial nation, ruled by Consuela de la Morrela with an even hand, and remarkable for its compulsory military service, keen interest in outer space, and ubiquitous missile silos. The compassionate, democratic, devout population of 2.218 billion Mexicans enjoy extensive civil freedoms, particularly in social issues, while business tends to be more regulated.

The medium-sized government juggles the competing demands of Education, Administration, and Healthcare. It meets to discuss matters of state in the capital city of Consuela Cleaning Services. The average income tax rate is 42.6%, but much higher for the wealthy.

The powerhouse hard-working economy, worth 219 trillion Lemon Pledges a year, is broadly diversified and led by the Tourism industry, with major contributions from Information Technology, Arms Manufacturing, and Beef-Based Agriculture. State-owned companies are common. Average income is 99,168 Lemon Pledges, and evenly distributed, with the richest citizens earning only 2.5 times as much as the poorest.

Major boxing matches are held in government buildings, trust-fund babies line up for places in community college, prolonged government investigations are a common revenge tactic among spurned significant others, and ice-filled coffins are ominously positioned in the corner of every hospital ward. Crime, especially youth-related, is totally unknown. Consuela de la Morrela's national animal is the Cucaracha, which is also the nation's favorite main course, and its national religion is UղOʀtҺodox Christianity.

Consuela de la Morrela is ranked 47,172nd in the world and 32nd in The Bar on the corner of every region for Most Efficient Economies, scoring 92.93 on the Krugman-Greenspan Business Outlook Index.

Most Recent Government Activity: 12 minutes ago