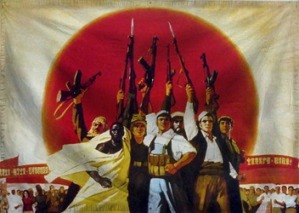 The Armed Republic of Comrade 255 is a gargantuan, efficient nation, remarkable for its compulsory military service and irreverence towards religion. The hard-working population of 15.447 billion Comrade 255ians are either ruled by a sleek, efficient government or a conglomerate of multinational corporations; it's difficult to tell which.

The very strong Comrade 255ian economy, worth 811 trillion Labormarks a year, is broadly diversified and led by the Information Technology industry, with major contributions from Arms Manufacturing, Woodchip Exports, and Trout Farming. Average income is 52,548 Labormarks, with the richest citizens earning 8.9 times as much as the poorest.

Crime is moderate, with the police force struggling against a lack of funding and a high mortality rate. Comrade 255's national animal is the Wolf, which can occasionally be seen sifting through garbage in the nation's cities.