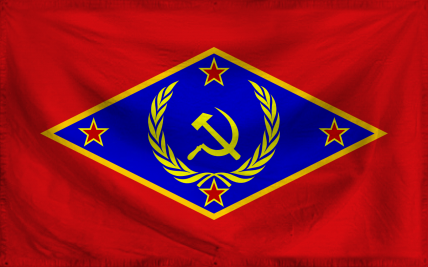 The Grand Red Republic of Chalredonia is a gargantuan, environmentally stunning nation, ruled by Premier Asmo Kelengy with a fair hand, and notable for its vat-grown people, multi-spousal wedding ceremonies, and free-roaming dinosaurs. The compassionate, democratic, cheerful population of 15.525 billion Chalredonians are free to do what they want with their own bodies, and vote for whomever they like in elections; if they go into business, however, they are regulated to within an inch of their lives.

The enormous, socially-minded, outspoken government juggles the competing demands of Education, Environment, and Healthcare. It meets to discuss matters of state in the capital city of Cadro City. The income tax rate is 100%.

The frighteningly efficient Chalredonian economy, worth a remarkable 3,596 trillion Calaxes a year, is driven entirely by a combination of government and state-owned industry, with private enterprise illegal. The industrial sector, which is highly specialized, is led by the Information Technology industry, with major contributions from Tourism and Book Publishing. Average income is an amazing 231,661 Calaxes, and distributed extremely evenly, with practically no difference between the richest and poorest citizens.

The nation has opened its arms to an influx of refugees, tourists visiting the nation are harangued for being capitalist pig-dogs, modelling agencies send their clients to work in nursing homes, and leather-clad individuals can be seen walking their slaves in public parks. Crime is totally unknown, thanks to a capable police force and progressive social policies in education and welfare. Chalredonia's national animal is the Microraptor, which frolics freely in the nation's many lush forests.

Chalredonia is ranked 883rd in the world and 16th in The Communist Bloc for Healthiest Citizens, with 35.92 bananas ingested per day.