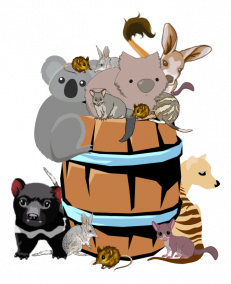 The Non-Euclidean Geometries of Barrel of Marsupials is a massive, socially progressive nation, ruled by Wallace Pouch with a fair hand, and notable for its daily referendums, lack of airports, and compulsory vegetarianism. The compassionate, democratic, cheerful, devout population of 3.441 billion Marsupials are free to do what they want with their own bodies, and vote for whomever they like in elections; if they go into business, however, they are regulated to within an inch of their lives.

The government — a sprawling, bureaucracy-choked, socially-minded, outspoken morass — juggles the competing demands of Administration, Welfare, and Healthcare. It meets to discuss matters of state in the capital city of Bilge Waters. The average income tax rate is 90.3%, and even higher for the wealthy.

The powerhouse Barrel economy, worth 288 trillion fresh airs a year, is driven entirely by a combination of government and state-owned industry, with private enterprise illegal. The industrial sector, which is highly specialized, is mostly made up of the Tourism industry, with significant contributions from Basket Weaving and Book Publishing. Average income is 83,838 fresh airs, and distributed extremely evenly, with practically no difference between the richest and poorest citizens.

Mothers are routinely abandoning their children in the name of women's rights, voter turnout for the election of the Junior Assistant for Non-Digital Media Strategies has been unsurprisingly low, the government sends submarines to retrieve bodies from shipwrecked submarines, and reflection is vital for badly behaved politicians. Crime is totally unknown. Barrel of Marsupials's national animal is the Marsupial Lion, which frolics freely in the nation's many lush forests, and its national religion is Cult of the Venerable Bandicoot.

Barrel of Marsupials is ranked 267,282nd in the world and 146th in South Pacific for Largest Retail Industry, scoring -26.23 on the Shrinkwrap Consignment Productivity Index.