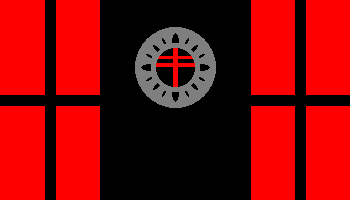 The Empire of Adazarn is a gargantuan, safe nation, ruled by Akistrodon Contortrix with an iron fist, and renowned for its avowedly heterosexual populace, complete lack of public education, and complete absence of social welfare. The hard-nosed, hard-working, cynical, humorless population of 33.993 billion Adazarns are ruled with an iron fist by the corrupt, dictatorship government, which oppresses anyone who isn't on the board of a Fortune 500 company. Large corporations tend to be above the law, and use their financial clout to gain ever-increasing government benefits at the expense of the poor and unemployed.

The relatively small, corrupt, moralistic, pro-business, well-organized government is primarily concerned with Defense, with Law & Order also on the agenda, while Welfare and Social Policy are ignored. It meets to discuss matters of state in the capital city of Contortrix. Citizens pay a flat income tax of 9.1%.

The very strong Adazarnian economy, worth a remarkable 3,203 trillion darkins a year, is driven entirely by a combination of government and state-owned industry, with private enterprise illegal. The industrial sector, which is broadly diversified, is led by the Arms Manufacturing industry, with major contributions from Information Technology, Uranium Mining, and Woodchip Exports. Average income is 94,230 darkins, but there is a significant disparity between incomes, with the richest 10% of citizens earning 340,758 per year while the poor average 18,596, a ratio of 18.3 to 1.

Military spending is on the increase, penurious citizens die from easily remedied ailments because they aren't 'taking enough initiative', citizens who become homeless are immediately executed, and Akistrodon Contortrix has been self-declared as the Most Supreme Magnificent Overlord of Everything You Ever Saw. Crime, especially youth-related, is totally unknown, thanks to a capable police force. Adazarn's national animal is the Adder, which teeters on the brink of extinction due to widespread deforestation, and its national religion is Contortrism.

Adazarn is ranked 233,312th in the world and 3rd in Island of Lost Souls for Most Popular Tourist Destinations, with 15.45 Tourists Per Hour.