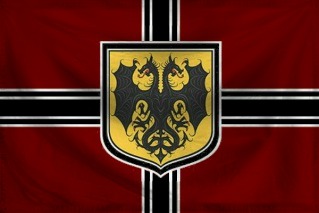 The Allied Imperium of 13 Court Gaurd Squads is a gargantuan, cultured nation, ruled by Allied Emperor Tiberius V with an even hand, and remarkable for its compulsory military service, unlimited-speed roads, and punitive income tax rates. The compassionate, democratic, cheerful, devout population of 20.345 billion Imperials enjoy extensive civil freedoms, particularly in social issues, while business tends to be more regulated.

The enormous, corrupt government juggles the competing demands of Education, Environment, and Industry. It meets to discuss matters of state in the capital city of Zevnenwick. The income tax rate is 100%.

The frighteningly efficient Imperial economy, worth a remarkable 6,234 trillion Imperial Drachmas a year, is driven entirely by a combination of government and state-owned industry, with private enterprise illegal. The industrial sector, which is quite specialized, is led by the Tourism industry, with major contributions from Book Publishing and Information Technology. Average income is an amazing 306,436 Imperial Drachmas, and distributed extremely evenly, with little difference between the richest and poorest citizens.

The thin blue line is composed of picketing police officers demanding better pensions, military units are often seen arguing over which one is truly favored by the gods, prenuptial contracts have replaced diamond rings in marriage proposals, and people can't decide between preserving forests and buying print copies of 'Dogman Versus The Giggler'. Crime is totally unknown, thanks to a capable police force and progressive social policies in education and welfare. 13 Court Gaurd Squads's national animal is the Void, which frolics freely in the nation's many lush forests, and its national religion is Followers of the Apocalypse.